2014 United States of America's State of the Union

Tonight January 28th, 2014 at the United States of America's State of the Union "seated with the First Lady is Sgt. 1st Class Cory Remsburg, a wounded Army Ranger who has met President Obama three times: once before he was wounded while participating in a D-Day reenactment in Normandy, France, and twice after his injury, at National Naval Medical Center, Bethesda, Md., and in Arizona during physical rehabilitation.
Now 30 and living in Phoenix, Remsburg was serving with 1st Battalion, 75th Ranger Regiment in Afghanistan when he and other members of his unit were struck by a roadside bomb on Oct. 1, 2009. The deployment was Remsburg’s tenth; he received a severe traumatic brain injury in the blast, lost sight in his right eye and became paralyzed in his left arm."  source: http://www.militarytimes.com/article/20140128/NEWS05/301280016/Military-not-likely-focus-Obama-State-Union-address

Did anyone notice the very long applause for Cory Remsburg.  We appreciate Cory very much, but he would probably have traded all the applause for his health.  Why do we applaud those that are killed and bombed and not speak about reducing and eliminating war and weapons? 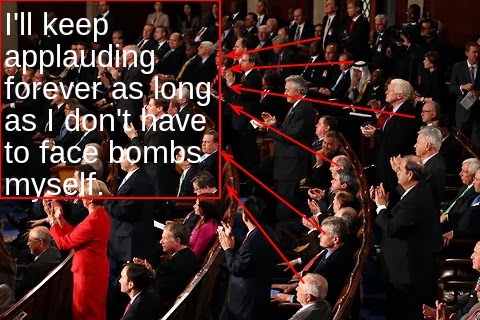 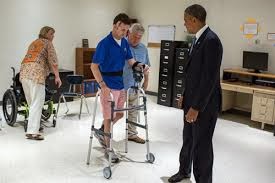